On September 1, 2012, Harold Lane David died aged 91. He was lyricist best known for his collaborations with composer Burt Bacharach. Together they wrote and composed for Marty Robbins, Dionne Warwick, The Carpenters, Dusty Springfield, B. J. Thomas, Gene Pitney, Tom Jones and Jackie DeShannon. Some of their best known compositions are “Raindrops Keep Fallin’ on My Head”, “We Have All the Time in the World”, “This Guy’s in Love with You”, “I’ll Never Fall in Love Again”, “Do You Know the Way to San Jose”, “Walk On By”, “What the World Needs Now Is Love”, “I Say a Little Prayer”, “(There’s) Always Something There to Remind Me”, “One Less Bell to Answer”, “Alfie” and “Anyone Who Had a Heart”. David and Bacharach worked on soundtracks for movies “What’s New Pussycat?”, “Alfie”, “Casino Royale” and “Butch Cassidy and the Sundance Kid”. Their compositions “Don’t Make Me Over”, “(They Long to Be) Close to You” and “Walk On By” have been inducted into the “Grammy Hall of Fame”. David contributed lyrics for three James Bond movies, and wrote lyrics for other composers including Morty Nevins, Albert Hammond, Sherman Edwards and Paul Hampton.

On November 4, 1997, “MCA” label released “Deuces Wild”, the thirty fifth B.B. King studio album. It was recorded in 1997, and was produced by John Porter and Chris Lord-Alge.

In December 1974, “Atlantic” label released “New and Improved”, the fifth Spinners album. It was recorded in 1974, at “Sigma Sound Studios” in Philadelphia, Pennsylvania, and was produced by Thom Bell. 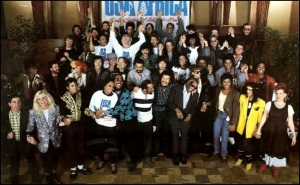 On January 28, 1985, the song “We Are the World” was recorded in the “A&M” studios in LA. The USA response to the UK Band Aid’s “Do they know it’s Christmas” was written by Michael Jackson and Lionel Richie and produced by Quincy Jones and Michael Omartian for the album We Are the World. The single was released on March 7, 1985 on “Columbia” label and sold over 20 million copies worldwide.

The following singers, musicians and celebrities took part in the song: