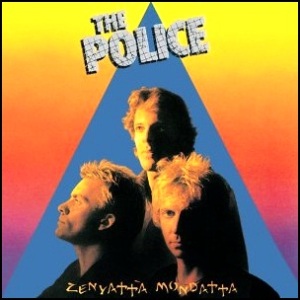 On October 3, 1980, “A&M” label released “Zenyatta Mondatta” the third Police (The) studio album. It was recorded July – August 1980, at “Wisseloord Studios” in Hilversum, Netherlands, and was produced by Sting, Andy Summers, Stewart Copeland and Nigel Gray. The album won two “Grammy Awards” including “Best Rock Performance by a Duo or Group with Vocal” for “Don’t Stand So Close to Me” and “Best Rock Instrumental Performance” for “Behind My Camel”.  The album was certified Platinum in Canada by “Music Canada”; Platinum in France by “SNEP”; Platinum in UK by “BPI”, and 2 x Platinum in the US by “RIIA”.

All tracks by Sting, except where noted.