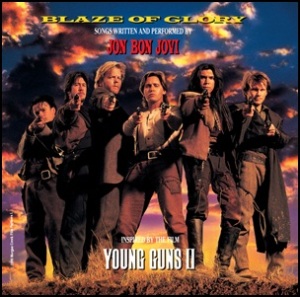 On August 7, 1990, “Mercury” label released “Blaze of Glory”, the debut Jon Bon Jovi solo studio album. It includes songs from and inspired by the movie Young Guns II. It was recorded April – June 1990, and was produced by Jon Bon Jovi and Danny Kortchmar.

All tracks by Jon Bon Jovi, except where noted.