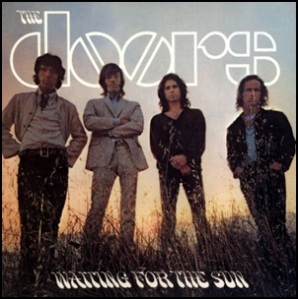 On July 3, 1968, “Elektra” label released “Waiting for the Sun”, the third Doors studio album. It was recorded February – May 1968, at “TTG Studios” in Hollywood, and was produced by Paul A. Rothchild.  “Waiting for the Sun” became the band’s first and only No. 1 album. The album was certified Platinum in the US by the “RIIA”; Platinum in Canada by “Music Canada”; 2 x Gold in France by “SNEP”; Gold in Germany by “BVMI”; Gold un UK by “BPI”.

All tracks by Jim Morrison, Ray Manzarek, Robby Krieger, and John Densmore, except where noted.